Professional Engineering designed a ruggedized state of the art Synthetic Aperture Radar (SAR) system for Argon ST, a wholly owned subsidiary of The Boeing Company. The challenge was to integrated 8 Rotman lenses with a yield strength of just 1200 PSI, which is about 30 times more vulnerable than steel, so that it would survive 9 G crash safety requirements. Professional Engineering joined PTFE and FR4 into a hybrid composite with a .010″ structural adhesive bond line to satisfy the RF and mechanical requirements.

The system was fed by 88 RF (3GHz) inputs, and featured 64 RF outputs, as well as communication and various system monitoring connections. The design met or exceeded all MIL-810-F specifications by analysis for Shock and Vibration, prior to testing.

Furthermore the unit was designed to withstand operational acceleration as well as the flight profile PSD. Extensive FEA analysis and light-weighting techniques were employed to optimize the structures Margin of Safety (MOS) while at the same time besting the maximum weight restriction of 58 lbs.

Pro-e stepped in to remediate the design of a 21 slot VME enclosure that failed its week 26 Critical Design Review (CDR) with only 2 weeks of schedule remaining. A comprehensive redesign was required and the only design feature to remain was the backplane itself.

The structure was rethought to draw air in from the front bezel and exhaust it out the sides and rear of the unit. The six 100 CFM fans were replaced with two 28 VDC blowers rated at 500 CFM each. Airflow was increased by more than 25 times in the end slots, and smoothed using expanded aluminum honeycomb to balance the middle slots. The system was capable of rejecting a world beating 50W per slot, besting the 35W previous maximum.

The power supplies were consolidated into a modular high efficiency 2000 Watt, 400 KHz switcher, a custom wire harness was developed in conjunction with a ground block and off the shelf high reliability circuit breaker and inlet power filters.

With meaningful contributions from a whole spectrum of suppliers, and no shortage of midnight oil expended, two (2) completed, tested and operational enclosures were delivered to Newport News in time for the USS Oklahoma’s (SSN-723) sailing.

Pro-e was invited to opine about the strength of the SpaceShipOne rocket motor diffuser.

The next day Pro-e recommended that the diffuser be strengthened that it may withstand the stress induced by the pressure on the flange against the seat of the engine.

Little did we know was that the rocket engine design had failed in catastrophic fashion the day before: http://www.nbcnews.com/id/19983814/ns/us_news-life/t/blast-aerospace-site-calif-airport-kills/#.VxFQsvkrIUF

Pro-e was contracted to remediate the diffuser so that it may survive the bending and shear stresses caused by the enormous pressure necessary to distribute the oxidizer onto the solid rocket fuel . The size, orientation and pattern of the nozzle holes were optimized to uniformly coat the solid booster fuel and reduce the load on the diffuser. Next the flange thickness was increased and a generous radius was incorporated to further reduce stress concentration. Finally after a thorough structural FEA of the flange design, and in order to increase the margin of safety, Pro-e worked with the steel supplier to order and ship a billet of 15-5 SST in condition A to the machine shop. After machining Pro-e coordinated with the heat treating experts to precipitation harden the diffuser to its final  H900 condition, delivering a yield strength of 200KSI and an ultimate tensile strength North of 212 KSI.

Pro-e developed and optimized the cooling fins in a forced air ruggedized ballistic shock resistant enclosure for the Marine Corps. Pro-e had the immersion rated fans tested at NTS to obtain an accurate fan curve. The fan curve characteristics were inputted into MG CFD to simulate the fan’s operational output.

The opening, shape and path of the airflow was modeled and optimized through the use of baffles, refinements to the chassis to reduce sharp edges as well as the addition of an inlet Venturi to increase airflow.

A series of folded fins were designed, and then studied to optimize the cooling performance of the enclosure. An arrayed FEA study that considered the length (1-13″), thickness (.004-.015″) and spacing (.005-.125″) of the fins was performed to evaluate designs fabricated form both Al 6063 and Copper Alloy C11000.

The results of this comprehensive study were integrated into the design of the chassis.

Pro-e redesigned the Cymer 5000 series laser system to improve manufacturability, and then subsequently designed the 6000 series system and incorporated the lessons learned from the DFM and CR efforts on the 5000. In addition, Pro-e designed an optical fixture to test the components of the line narrowing package’s 1″ and 2″ CaF prisms, saving 240 hours of labor per laser. US Patent No. 5,894,352. 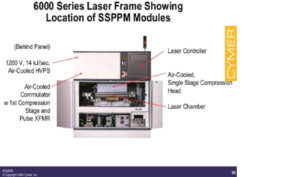 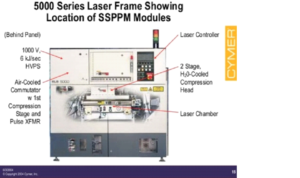 The system designed by Pro-e included a number of revolutionary ideas, including an erbium doped fiber amplifier to allow the unit to work in all weather conditions. This allowed a class 1A laser to operate at class 3 levels and remain compliant through judicious duty cycle application. The amplifier section was isolated from the optical bay so that the thermal expansion of the system could be controlled for best focus in all temperature regimes. A vent with 60 degree expanded aluminum grills was added to allow for amplifier heat extraction and to prevent rain intrusion. A small heating element was used for cold weather operation. Silver impregnated adhesive was used on the transparent front cover and a 14 VDC source was activated during fog and rain events. The entire optical train was mounted on AZ-EL gimbaled rings. The optical plane was balanced on jewel bearings to improve response time and to minimize power consumption. Powerful voice coils were used together with a Galil motion controller to adjust the optical plane to maximize signal strength 50 times a second. The system also used a frequency spreading strategy to maximize throughput. Each of the four 1550 nm transmitters and receivers were tuned to the upper, median, and lower permissible wavelengths in an attempt to minimize the effects of Mie and Rayleigh scattering. A telephoto (Doublet-Singlet lens tube design) was used to optimize spot size and further minimize the effects of thermal variations through the use of differential CTE materials to maintain best focus despite temperature excursions. 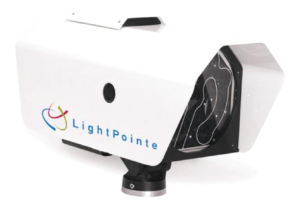